Differences Between Pedestal And Tower Fans 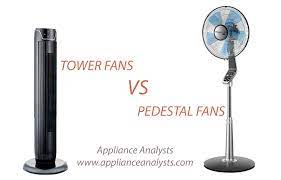 During the summer, having a source of the cool breeze coming towards you can be so refreshing. You might be confused about whether to go for a pedestal fan or tower fan. We’ll present to you the differences between pedestal and tower fans.

Both product categories include models that can be used even in the tiniest of spaces. Generally, they are easy to transport and stay by your side whenever you are leaving the room, with just one hand movement they are set up in a different place. Before we go into the details about both product categories, get an idea of what exactly it is you want your fan to do for you. The following checklist shall serve as an aid. Your prospective portable fan should fulfill all aspects you deem essential.

What do you want your fan to do? Consider:

The airstream a slim tower fan generates reaches up to 30 meters wide into the room. The motor of devices is located at the end of the oblong impeller (see picture, no. 8). In the case of cross-flow or tangential fans, the air taken in is blown off through the vertical outlet vents.

The oscillation by up to 115° happens on the inside of the housing or around the pedestal. Conventional pedestal fans with a wide cage can bump against users or furniture by accident if the size and motion are not taken into account. Another advantage of tower fans: The tangential impeller is usually very quiet.

Pedestal fans are axial-flow fans with a protective grille on a stand, mostly the bar can be adjusted vertically. The airflow is lead through the motor on the center of the fan head and exits on the front of the fan. The strongest pressure is at the top, at the level of the fan head.

Thanks to the way the air is guided these articles are partially suitable for use as wind machines in industrial environments. With an adjustable pitch and oscillating feature pedestal, fans can circulate the entire air inside the room. If you are working standing up, simply tilt the fan upwards. Once you are sitting down, adjust the fan head again.

A powerful pedestal fan does not only whirl around the indoor air, instead but there is also circulation on all levels of the room. That means in the winter a model like this can recirculate warm air from the radiator. Warm air weighs much less than cold air and therefore rises upwards.

Once it reaches the ceiling the heat energy becomes useless. Between the ground and the ceiling level, there is a temperature difference of several degrees. These rooms are described as cold underfoot.

The heads of the pedestal fans are simply directed towards the ceiling for use in winter. The way should not be obstructed by objects or furniture. At the lowest speed, the fan moves cold air to the ceiling. Thereby warm air on the ceiling is set in motion and temperature is gradually equalized. The output of the source of heat can be reduced, constant fuelling of the fireplace is not needed anymore.

For a detailed comparison, we’ve compared these two types of fans in different aspects. Consider which factor may be important to your living space, and it can reveal which fan type will best suit your home.

Tower and Pedestal fans are two of the tallest types of fans out there. While a pedestal fan stands high and mighty, blowing air from a height, tower fans tend to blow air up their entire height.

This is the key difference between the two.

Alternatively, tower fans are made to sit in front of you.

Because their airflow reaches from the floor upwards, they can’t be placed behind anything. This makes them much more suited to being placed a few feet from where you’re sitting.

While these two types of fans can cause the same, they deliver entirely different types of airflow.

Pedestal fans can be real powerhouses. They work the same way that old propeller planes used to be powered – so you can see how powerful they can get!

Modern pedestal fans can pack an amazing amount of force behind them. They come with sturdy bases and powerfully optimized fan blades – giving you as much airflow as you’ll ever need.

On the other hand, tower fans are more like turbines or old windmills. They use a spinning set of blades to spin up and shoot air out of their opening:

While this is works to give air out the whole tower, it’s nowhere near as powerful or direct as a pedestal fan.

The amount of sound from your fan makes all the difference. Instead of “this is so cooling and relaxing”, you can find yourself saying “yeah the air is nice, but why won’t it shut up!”

Now – any high-quality, modern fan will be mostly silent. But unfortunately for tower fans, the way they push air out is simply a noisier mechanism than a pedestal fan.

Instead of 3-5 simple blades spinning on a quiet axis, tower fans have entire towers of turbine-shaped blades being spun around inside a cylinder. This will just always be louder than a pedestal fan (despite giving less airflow).

Even on the highest setting, you can barely hear the blades spinning. The only noise is the strong airflow coming from the fan blades.

For mobility, it’s roughly a draw between tower and pedestal fans.

Both are easy to place – though pedestals have a slight advantage of being able to sit behind something. Great for using as an office fan.

However, moving requires the same amount of weight and hassle as the plugs. Aside from that, mobility’s a draw.

Pedestal and Tower fans are great space savers –  but for different reasons.

Tower fans are often slim, easy to place, and barely take up any floor space. This makes them fantastic to sit next to your couch or bed. They’re ideal for when you have limited floor space.

On the other hand, pedestal fans tend to have a big, sturdy base. This is needed to help balance them and the extra power they have. While this can take up more space, they make up for it by sending the airflow over a longer distance. Meaning you have more options to place them.

Modern fans have plenty of features – and these are available to both types of fans.

Remote controls, oscillation, different modes, timer settings, and even child locks, can be found on most modern fan models. Features are roughly a draw between both models.

Modern tower fans are starting to look incredibly good. Almost like an ornamental part of the room.

Tall, sleek, slender designs make them blend in with most modern living spaces. On the other hand, pedestal fans aren’t quite as glamorous.

There’s not much you can do to improve the looks of fan blades on a stick. However, some modern models are looking very respectable. Like the Rowenta fan features in the Noise section above.

The price ranges for both types of fans are around the same.

Starting at anywhere from $20, all the way up to $80 for decent models. However, pedestal fans have a ‘super high-end category’.

These absolute-machines will cost you over $100. Why? Because they’re super silent, super powerful, and super reliable. It’s a hell of a lot of money for a fan, sure. But they’ll last, and never fail to have your friends commenting about how silent but strong they are.

Particularly in apartments in major cities space is limited. A slim fan that has various features (cooling, heat recovery) and can humidify the air is ideal in that case. In a privately-owned house both a space-saving tower, fand and a vertically adjustable pedestal fan are good choices.

Pay attention to data about the operational noise if you are looking to put the fan next to the bed, desk, or seat. For use at night, we recommend models with a timer feature. Professional pedestal fans/wind machines with protection against dust and water ingress are suitable for outdoor areas and damp rooms.

Both product categories (pedestal and tower fans) allow even circulation of air. The most distinctive difference is in the direction of the impeller. Whereas the airflow passes a tangential-flow impeller at its full length, axial-flow fans can reach each corner of the room using pitch and direction. The decision should not be made based only on the type of construction, but also on the additional benefits your new fan has to offer. Go see our checklist for more information.